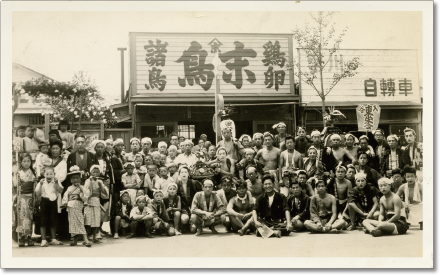 This photo is taken in 1940s in front of chicken factory.
The guy in the circle is Kintaro(Second Generation)

Torisue was established by Mr. Suekichi Yamaguchi in 1872 in Tokyo, Japan. The company name originated from his first name “SUE” and his wife’s name “TORI”. There were only 3 chicken factories in the entire Japan at that time.

Kintaro was the second generation owner and he handled the family business spirit faithfully. Fukutaro, the third generation, brought the business to the next level; unfortunately, soon after, the massive attack during World War II left it ruined. Not only the building and equipment were destroyed, but sadly also the business itself.

The lady standing on the left is Keiko(Fukutaro’s wife) ,taken in 1960s.

Fukutaro re-established Torisue, after the war in 1945. The effort was unbelievable. He opened a small soup shop in Asakusa where famous Buddhist temples and traditional festivals are located. The soup was consistently served warm with a sweet black beans flavor. The people in town who had been beaten physically and mentally by the war were relieved. They were able to have peace of mind with Fukutaro’s soup. Every single day, storm or rain, Fukutaro worked tirelessly in his soup shop until he earned enough money to grow the business. At the same time, he used his effort to continue the communication between his customers and the company. He did not want to lose the customers’ trust. The trust, increased over time.

Fukutaro(Third Generation) is in front of the soup shop.

Yasuyuki, the 4th generation, helped in the family business since he was a student. After he became a high school graduate, he went into the chicken factory and restaurant industry. His journey continued for over 10 years until he was satisfied that he had acquired the necessary skills towards running the portly. After he took over the company until his retirement, the company launched a restaurant business specializing in chicken. In a short period in 1990, Yasuyuki opened 10 restaurants in downtown Tokyo! He expanded the brand strategy and decided not to keep to the traditional Japanese style. Yasuyuki had quite a sense of trend, a knowledge of modern culture and a keen business sense. His creation was infused with French and Italian taste, and Jazz music. He knew that the customers would not only love the food, but would appreciate their dining experience- the atmosphere was infused with lively music.

Meanwhile, Yasuyuki continued to grow the business, and his son, Masanori (fifth generation) came on board at the age of sixteen. Because the old era didn’t allow Yasuyuki to see the world, he yearned for his children to experience and adopt cosmopolitan thinking and to see the world. Masanori became a backpacker, traveling to 20 countries in 3 years! The journey was not only related to food and beverage businesses, Manasanori’s eyes were also opened as he gained insight into other cultures and ways of life. He was exposed to different methods of agriculture. He worked as a volunteer to help in the fight against poverty and child prostitution through NGO. When the devastating earthquake hit Sichuan, China in 2008, Masanori immediately made a decision to join a disaster relief act.

In 2017, Masanori became the CEO of the family business. It has been 140 years since the company was first established. Through five generations, the longevity of the business has brought Torisue an understanding of all; producers’, distributors’, retailers’, and consumers’ point of view. The company has established a great rapport with local farmers and is able to provide the freshest and highest quality of services and products. Masanari continues the tradition of supporting local